R4LA:  An organization to support independent Rovers all over the world...for life! 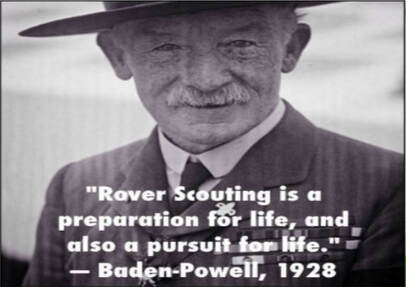 Rovering, or Rover Scouting, was conceived by Baden-Powell about 10 years after he founded Scouting in the UK; he published his monumental book, Rovering to Success, in 1922, defining the movement.  Originally, he thought of Rovers as the third and final installment of Scouting, after Cubs and Scouts, to help bridge Scouts into adulthood.  His idea was to teach them Health, Happiness, and Helpfulness, to make them productive citizens.  As his concept of Scouting evolved, and many Scouts graduated into adulthood, B-P began to see Rovering as Scouting for life.  In the last Policy, Organization and Rules (1938) of the Boy Scouting Association in the UK that he approved, there was no mention of an upper age limit for Rovering; neither in his book.  Unfortunately, after his death, the major Scouting organizations in the world making up the World Organization of the Scout Movement (WOSM) fairly well uniformly instituted an age range of 18-25, making Rovering a young adult program only.  Older Scouts were expected to retire or become Scouters.  Worse, many WOSM country organizations, including the UK and the USA, disbanded their Rover programs.  Later, as independent "more traditional" Scouting organizations began to emerge, partly in response to WOSM organizations moving away from B-P's original model, Rover Scouting for those over 25 was made possible again, including a personal development / advancement model with achievement badges for adults and a culture based around Knighthood.  The largest world organization of independent Scouting in the world, World Federation of Independent Scouting (WFIS), was formed in 1996, and sponsors national independent Scouting organizations that support Rovering for life.

However, after surveying the independent Scouting organizations around the world offering programs for adult Rovers, it appears that many of them are oriented primarily towards training Rovers to be Scouters, that is, to serve youth units in their groups.  The main traditional Scouting organization in the USA in fact currently does not allow Rovers to form Crews unless they are linked to youth groups as Scouters.  Those not associated with youth groups can only exist as Lone Rovers, so they cannot have the true original and complete experience of Rovering with a Crew.  Yet, there exist enthusiastic Rovers who still want to Scout for Scouting's sake!...that is, they still want to have exciting adventures in the open air, together with other like-minded Rover Scouts, continuing to develop themselves personally, serving their communities, and supporting the Scouting movement.

Perhaps you want to Scout for life but don't want to serve youth directly anymore, or you have retired from doing that after fulfilling that role, or would prefer to serve and support and mentor young adult Rovers.  This organization is for YOU!   Here you will find useful information about Rovering independently, starting your own Crew, ideas for adventures and service, a historical library of Rovering resources, training information, manuals, and more.  There is also a forum on Facebook to discuss your Rovering adventures and questions, share camaraderie and experiences.

What are the 4 Principles of R4LA?
R4LI is affiliated with the World Federation of Independent Scouts (WFIS) as a prospective member Chapter of the International Scouting Fellowship (ISF).   Click [HERE] to read our Bylaws.

Click [HERE] to join our Facebook Group to obtain FREE resources on Rovering and meet / converse with other Independent Rovers.

Click [HERE] to learn more about the Deep River Rovers, the first local and virtual Rover Crew of R4LA!